Indonesia’s 9.9 Festival Trends & Boost of E-Commerce Sales Amid the Pandemic

Celebrations and festivals have widely been received with much enthusiasm; particularly the collectivism value within Asian countries has been one of the driving factors behind their fondness of festivals. In the past 5 years where technology has brought the e-commerce experience to elevated levels and letting online marketplaces win the hearts of nations, a new festival concept that brings e-commerce and people even closer was born; online festivals. Firstly initiated by Alibaba’s Jack Ma, online festivals have then been commonly set in motion by Indonesian-born marketplaces,1 such as the consistently indulged 9.9 Online Shopping Festival which originated as Alibaba’s Wine Festival.2 Due to the resemblance of the date and the word “Alcohol” in spoken Chinese “jiu”, the day started as a festival of offering spirits through China’s online marketplaces and now become an iconic online shopping festival for the Asian e-commerce.3

The online shopping festival trend held during dates with double number combinations (e.g. 10.10, 11.11, 12.12) was slowly being picked up by Indonesia’s online marketplaces namely Shopee, Tokopedia, Lazada, Zalora, among others. The trend was also even more amplified with the establishment of 12th December 2012 (12.12.12) as Indonesia’s National Online Shopping Day (Harbolnas). As we are reaching the fourth quarter of 2020, Indonesians are looking at three upcoming online festivals that are usually held by the mentioned marketplaces following the 9.9 Online Shopping Festival which recently took place. While Indonesians are still living in caution of COVID-19, online shopping through various e-commerce platforms has gradually been perceived as a reliable solution since the partial lockdown was first regulated by the government. Consequently, e-commerce transactions during COVID-19 have experienced a significant spike with a 130% increase in marketplace transactions when compared to last year, on top of about 2.8 million transactions occurring per day nowadays.4

Not only is the enthusiasm raging among the consumers, more business owners have been shifting to digital channels as 1.8 million new online stores were created on Tokopedia amidst the pandemic.5 As the capital city anticipates another partial lockdown on 14th September6 that was announced during the same day as the 9.9 Online Shopping Festival, our findings indicate certain aspects in Indonesia’s e-commerce that were coupled with the lure of attractive promotions have seen some certain shifts. In looking forward to the coming online shopping festivals and Harbolnas, certain trends during the 9.9 Online Shopping Festival amidst this year’s pandemic situation can be a good ground for business owners in preparing themselves.

In 2019, the double nine festival was named as the ‘9.9 Shopping Day’ with more than 10 participating marketplaces involving Lazada, Shopee, Tokopedia, Blibli.com, JD.ID, Zalora, among others.7 This year, Lazada, Shopee, and Zalora maintain their participation in the annual festival while putting their own names to it.8 9 As such festivals were born from Alibaba’s innovations, Indonesia’s marketplaces have been learning and executing the similar strategies that were proven to be effective for Alibaba’s success over the years.

According to an analysis by Forbes’ contributors, there are 3 key factors that drove Alibaba’s successful online shopping festivals:

Adjusting it to Indonesia’s audience, various marketplaces have shown an identical approach to generate more sales during the festival. On last year’s 9.9 Shopping Day, both Shopee11 and Lazada12 held a live-streaming event featuring numerous famous celebrities of the nation. Scaling up, this year’s live-streaming commerce by marketplaces such as Shopee13 and Tokopedia14 have been featuring exclusive concerts of Korean Pop (K-Pop) groups instead. Live-streaming commerce is increasingly gaining momentum as it brings together 3 popular elements entailing mobile videos, influencers/key opinion leaders (KOLs), and exclusive/limited-time offerings.15 Since Indonesian consumers are considered to be more susceptible to messages delivered by the human factor (friends, families and social influencers),16 live-streaming commerce involving KOLs may give marketplaces or business owners in general a higher chance of inflicting the consumers’ trust.

At large, our internal data is able to conclude that this year’s 9.9 festival has inflicted more eagerness compared to last year’s. This is significantly portrayed in the quantity of orders that reached threefold as well as the transaction value that exceeded twofold than that of 2019. The increase in demand was not only captured in the Java and Bali provinces, but is actually observable in other provinces such as West Sulawesi, Central Sulawesi, and Bengkulu. In total, the demand from outside of Java and Bali provinces reached threefold than that of 2019, signaling that e-commerce sales in Indonesia is widening its distribution.

As the third quarter is on its way to wrap up, the COVID-19 outbreak in Indonesia is also reaching its 6th month soon, bringing about changes in the consumption habits of Indonesians ever since it started.19 During the first quarter of 2020, which marked the first positive cases within the country, SIRCLO’s data shows that the highest performing categories in e-commerce were Personal Care, Health, and Food & Beverages. In the second quarter when the capital city began to impose the Large Scale Social Restrictions (PSBB) and people remained in quarantine at home, Personal Care and Food & Beverages remained as the highest performing categories, while the demand for Household Goods began to rise. As the government continues to issue appeals for social distancing and work from home, it is apparent that people began to find merit in adopting new indoor activities, such as cooking.20 Between the months of July to September, we are witnessing another shift as Fashion entered the top 3 highest performing categories along with Personal Care and Household Goods. 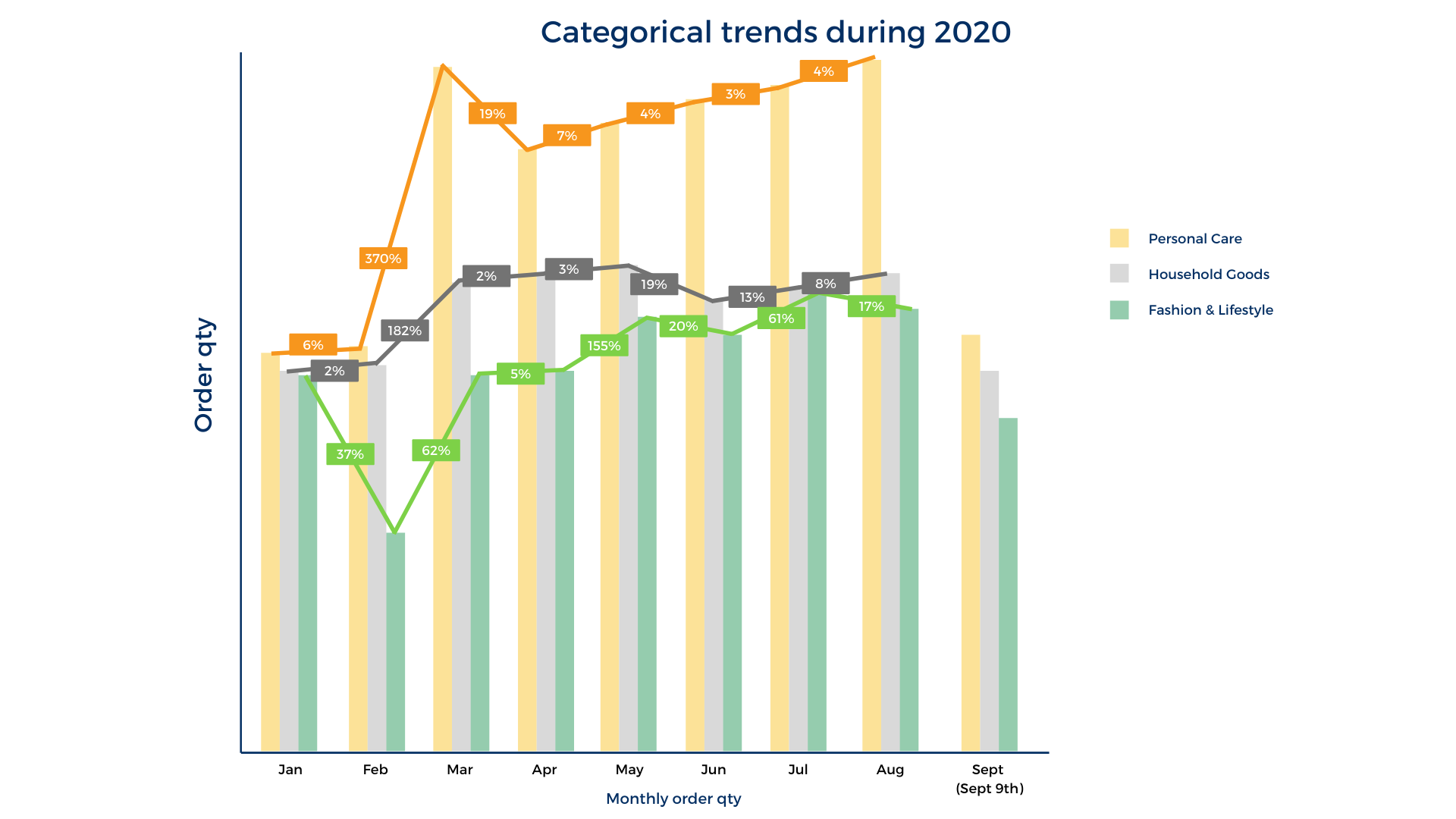 Another wave of new e-commerce users

The second quarter of 2020 experienced more than 88% increase in new e-commerce users compared to the previous quarter. Between April and June, most Indonesians were experiencing their first ever partial lockdown period, but also their first ‘new normal’ (adapting new habits phase) period after living in quarantine.21 When partial lockdown measures were lifted followed by the relaxation of the domestic travel regulations in early June, mobility was slowly increasing22 as the roads of Jakarta quickly returned to the usual hustle bustle. Moreover, multiple shopping malls and stores23 were beginning to operate as usual, allowing the people to conduct their shopping activities back offline. This is corroborated by our data findings, which point to a gradual decrease of new e-commerce users in the third quarter of 2020.

While many Indonesian cities have experienced a taste of the new normal in the past few months, the number of COVID-19 positive cases continue to rise, with as of early September reaching above 200,000.24 In response to that, the nation’s capital has officially released a statement indicating the need to “pull an emergency brake” and reimposed the PSBB effectively from September 14th.25 With non-essential places once again being on temporary shutdown, consumers are pushed to rely on online sales channels to fulfill their needs across various categories. During the capital’s first partial lockdown in April, we observed a rapid increase in the Health as well as Food & Beverage category26 as necessity fulfillment was perceived as urgent amidst quarantine. This second partial lockdown was coincidentally announced during the 9.9 festival after 6 PM.27 Particularly after office hours and the announcement, SIRCLO’s data indicated that the quantity of orders experienced a rapid increase. When zooming into the products, it is apparent that Personal Care products such as hand sanitizers and dairy products were mostly sought after by the consumers during those hours. 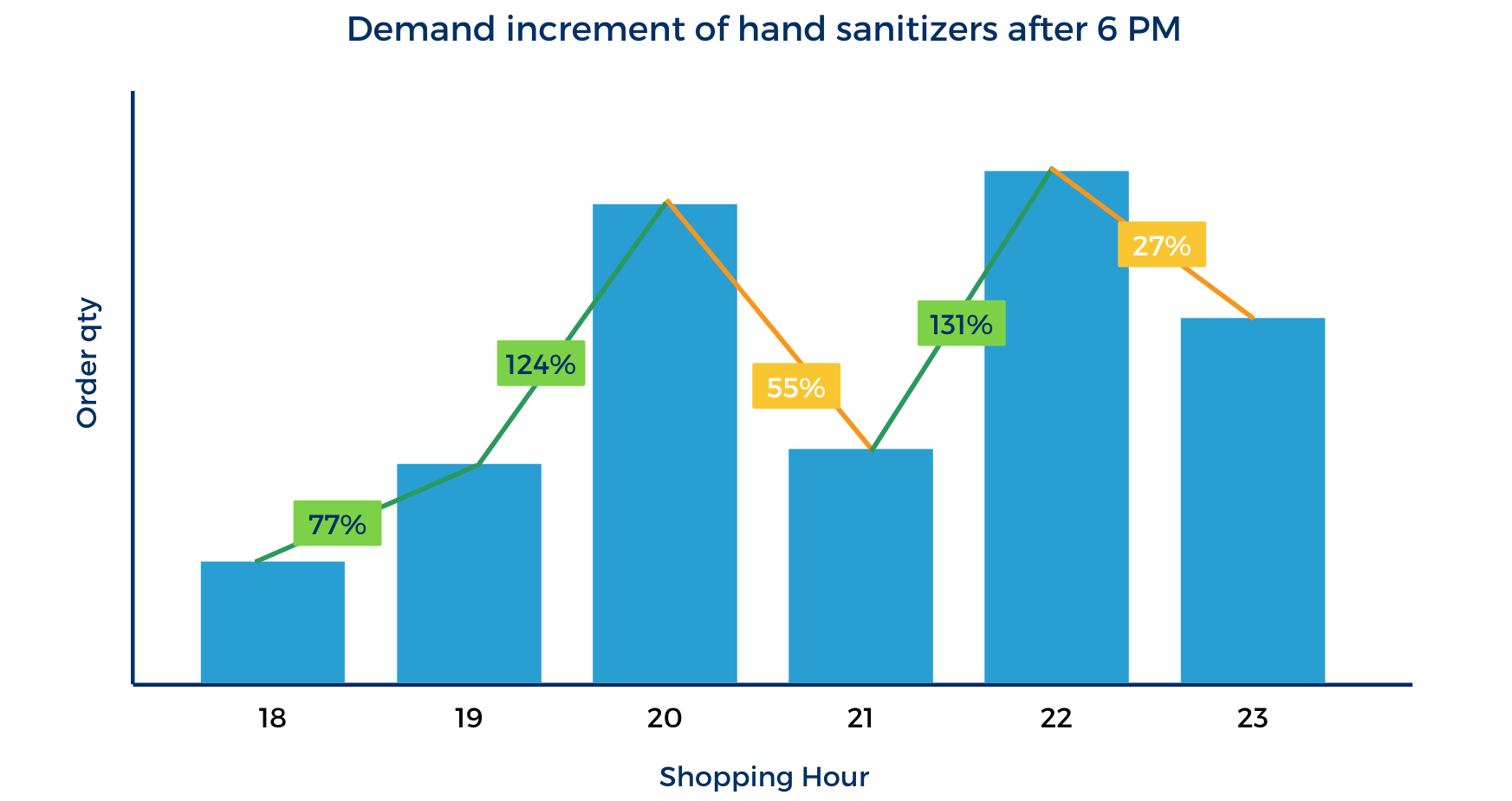 Going forward without a certain forecast of the end to this pandemic, Indonesians need to be prepared in expecting at least additional 1 to 2 months of protecting themselves from the virus threat.28 Needs fulfillment remains as a priority for continuity and the contactless services of e-commerce remains as an ideal solution for both consumers and business owners everywhere. In the upcoming months, e-commerce is awaiting more online festivals that could benefit both sellers and buyers. Looking at the recent 9.9 festival, our data findings predict a possible 3.5 fold increase in the upcoming 10.10 festival when compared to last year's. Therefore, business owners across all scales and industries that haven’t taken the liberty to optimize online channels should consider shifting now. Through the 3 pillars of e-commerce entailing websites, marketplaces, or chat commerce, business owners can maximize their business strategies through their preferred platform(s) that is perfectly suitable to reach their target audience. When you are in need of support in selling online, SIRCLO provides solutions that can cater to each of the e-commerce pillars with extended tailored expertise to help you grow in your e-commerce journey. Even though sudden changes have caused the outside world to pull the emergency brake on things, your business strategies need to still adapt at a fast pace. To put it plainly, it has now become critical to go and sell online.

SIRCLO neither provides regulated advice nor guarantee results. The materials we convey reflect general insight and best practice based on information currently available, and do not contain all of the information needed to determine a future course of action. Such information has not been generated or independently verified by SIRCLO and is inherently uncertain and subject to change. SIRCLO has no obligation to update these materials and makes no representation or warranty and expressly disclaims any liability with respect thereto.